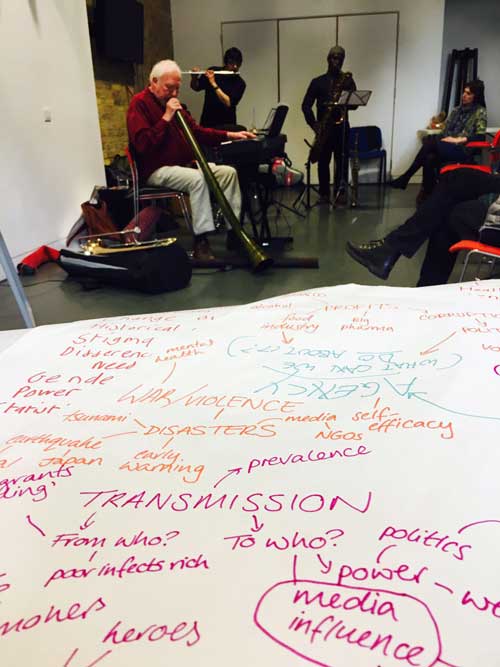 The Song of Contagion project launched on April 23rd 2016 in the wonderful Graeae Theatre studios in Hackney. We had a great mix of participants who contributed their ideas around the politics of decision-making in public health. Among the answers to the question: “Why are some diseases more important than others?” my favourite was: it depends where the disease sits on the Cuddly-to-Yucky and the Benign-to-Scary spectra. It’s a concept that’s endlessly rich (and is further developed in this later post)

The jackpot in terms of getting funding and attention is a disease which is really ‘scary’ but in a ‘cuddly’ population: for example HIV in innocent children. The worst case seems to be a disease which is relatively benign, affecting ‘yucky’ populations — by yucky, we really meant populations that aren’t good for photo opportunities or pulling on heartstrings. Chronic conditions in the grossly overweight are hard to get people excited about, for example. Unless, of course, you’re an executive in a Pharma company. Then, you LOVE chronic conditions because they mean people gave to take drugs every day of their lives.

The discussions were rich, varied and lively, and that’s before Tony, Tony and Carlos got the instruments out and set us off on demonstration of the musical parameters.

This part of the journey will continue in later workshops discussing and exploring these parameters through practical, hands-on, creative music-making – in which everyone can play a part, regardless of musical skill or experience.

Much more in a while, but for now, thanks very much to everyone who participated for giving up your Saturday to fill our heads and hearts with endless exciting possibilities.

We look forward to the rest of the journey. It promises to be great fun, even for those of us who would put statistics at the benign and music at the scary end of the spectrum. Please join in at any stage.